Tonight, I replace the two broken levers on my harp (with pictures illustrating the process, too!).

Step One: Assessment of Damage 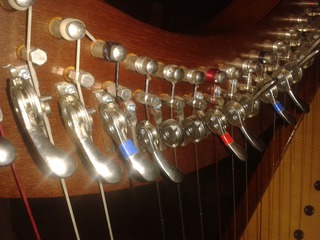 As You can see, it is merely the handle which is broken on them both. This has been an uncommon, but still present, risk with my harp: If I am ever too rough with it, especially while moving it, lever handles WILL snap.

I’ve heard it is less common for other lever types (I have a Camac harp with Camac Levers) but I am not willing to pay for the full switch over… Plus, as I found out during my locating of replacements, Camac has extraordinary customer service… even if I did have to pay to have them shipped from France.

So, to get the the point, I need to remove the two broken handles and replace them with better, not-broken ones. 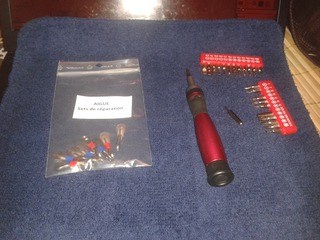 I’ll be honest, I was expecting it to be much more difficult to do this. You need a screwdriver or two (I have one with changable bits) in the sizes of T5, and either T9 or F9. You also need a steady hand, a replacement handle, and (if Yours are as dusty as mine) a rag to clean everything up while working.`

I fix a lot of things, so I had the bits I needed. But if You don’t have anything, buying all of the tools to do this fix shouldn’t cost more than $10… not including the replacement handles, of course, which are for sale here. 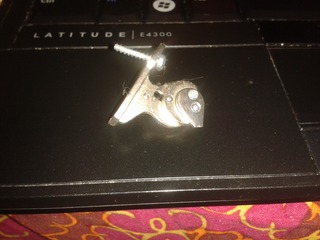 Unfortunately, I do have bad news: The levers are spaced so tightly together that there is no way I could have removed the handles without removing the entire lever from the instrument. This means that, after completing this fix, You will need to REGULATE the strings in question again, at the very least. If it has been a while (It had been, for me) then this would actually be a good time to do a FULL regulation. I’ll explain how I regulate my harp in another post, and link it here when I do.

Remove the levers with the T9 or the F9 screwdriver. Protip: The levers should be in the OFF position before You do so, or they will cling to the string after the screws are removed.

There are two (2) screws holding the handle to the lever, and a small part of the handle wedges into a groove underneath it as well. Remove both screws (Allow the lever to change positions if it wants to; Removing the handle made my lever turn to ON). Once the screws are removed, gently but firmly pull the broken handle off of the lever. It should have a small bit of resistance, but easily come off. 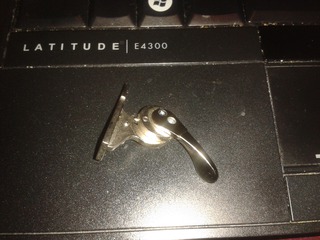 If the screws do not appear stripped, use the same ones and save Your replacements for later. Otherwise, replace them, lest the handle break again (I have a rivalry going with my A4 and B4 levers. They hate me.).

After it is, screw the handle down to fully secure it. 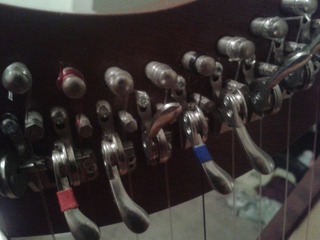 Putting the lever back on is tricky. Do NOT use new holes for the screws; mine were flattened screws, even, to prevent me from doing this. In fact, never drill any part of Your harp… if You can help it.

Instead (with the lever in the OFF position and without the screws) position it so that the string is securely held by the lever and the holes for the lever are fully visible through the holes on the lever. Then, simply engage the lever (turn it to the ON position) and it will hold itself there while You screw the screws in through the properly positioned holes.

NOTE: If You are regulating these levers (You REALLY need to do this) do not screw the screws all of the way in. Instead, leave them about a half turn unscrewed: Tight enough to keep the lever from moving on its own, but loose enough that You can move it as You regulate.

Go back to Step Three and repeat unitl You have no more broken levers. 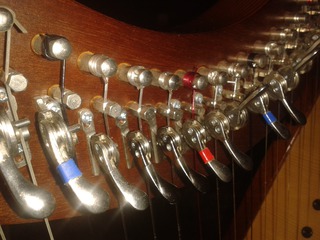 Again, I will go into this more in a later post, but the basic idea is the same as positioning a movable bridge on a banjo or violin: The distance between the part of the lever which contacts the string and the soundboard needs to be perfectly positioned, so that when the lever is engaged Your previously-in-tune string is still in tune, just a half step higher. Here are some quick rules of thumb:

For more info, I will be making a post sometime in January here.

Here is a streamlined (TL;DR) version of the above process: 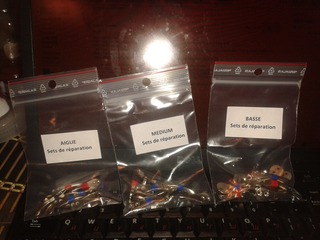 I buy all of my levers direct from Camac, now. They are extremely cordial and got me my levers in exactly 12 days, during the Holiday season, from France. Here is their website, though it is closed until the new year begins. And here are direct links to sets of 10 small, medium, and large levers (even though I was replacing levers in the middle of my harp’s range (I have a Camac Hermine) I still needed to use small levers. So, if You are ordering only one size, that is most likely the needed size if the note in question is above middle C).

Hopefully this helps. If You have any questions, feel free to ask in an email or in the comments below.