Today, I have a selection from Orchesographie that I first heard Nancy Hurrel play at a Somerset Harp Festival: Bransle Des Hermites, or The Hermit’s Bransle.

A Bransle is a circle dance where the nobles of the Renaissance would “pretend” to be things or people other than nobles. In this one, they pretend to be “Hermits”- that is, religious hermits, or monks. 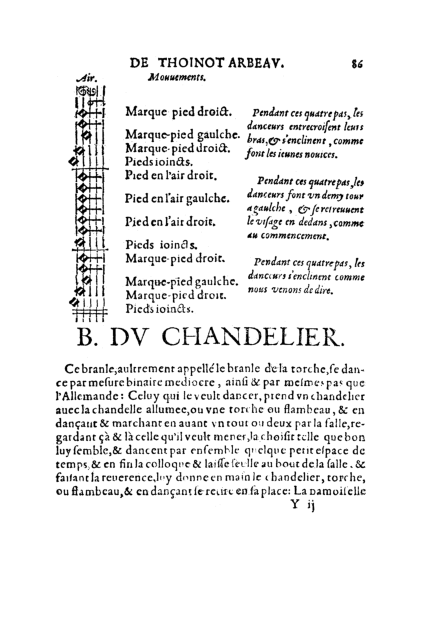 The dance is a fairly simple one: Two steps left, two right, two left, two right, turn around while kicking four times and bow while crossing Your arms on Your chest, turn while kicking again, and bow again. You are meant to step larger on the left steps, and shorter on the right: This is so the circle can go around fully during the song. And once it goes around once, the dance is over.

As for the piece, it was written in the key of G Dorian, and (as You can see) was in Mensural Notation (which was common at the time). I have transcribed it (using GNU/Lilypond) in both a cleaner mensural notation and a modern.

I’ll also be playing and recording it soon, on my soundcloud, so be on the look out for that! I’ll embed it here when it’s out.